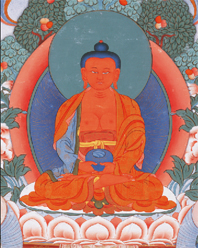 Amitabha (from a thangka in the personal collection of Sogyal Rinpoche)

Phowa (Skt. saṃkrānti; Tib. འཕོ་བ་; Wyl. ‘pho ba) is the practice for directing the transference of consciousness at the time of death, either for oneself or another. The consciousness may be transferred to the dharmakaya nature, to a pure realm such as Sukhavati or to a favourable existence in the human realm. The practice is one of the Six Yogas of Naropa, but is also to be found in many other lineages and systems of teaching, including the Longchen Nyingtik and Namchö cycles. Although it is included among the so-called 'five practices of enlightenment without meditation, it does require a thorough training before it can be put into effect successfully. Moreover, the teachings advise that phowa for others should only be undertaken by someone who has reached the path of seeing.

Patrul Rinpoche mentions another list of five kinds of phowa:

In the Dzogchen teachings, two kinds of transference are sometimes mentioned:

Phowa Teachings & Transmissions Given to the Rigpa Sangha