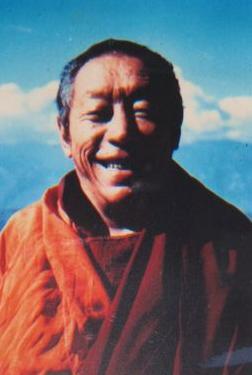 Khenpo Tupten Tsöndrü Phuntsok was born in the Iron Monkey year (1920) in the Golok province of East Tibet. His parents were followers of the Gelugpa school, and his father had been a monk at Sera Monastery. He entered the Dharma at an early age, and began his formal education at the age of seven.

At fourteen, he went to Dzogchen Monastery in the hope of studying with the great Fifth Dzogchen Rinpoche, Thubten Chökyi Dorje, but this master passed away soon after he arrived. He stayed on and studied with some of the great khenpos who were then teaching at the celebrated Shri Singha Shedra, which was then at its zenith. He studied with Khenpo Ngawang Norbu (father of the sixth Dzogchen Rinpoche) and Khenpo Pema Tsewang who were both direct disciples of the great Khenpo Shenga. It was Khenpo Pema Tsewang who taught him Abhisamayalankara, including Patrul Rinpoche’s commentary. He took ordination from Khenchen Pema Tekchen Loden and studied with many other khenpos including Khenpo Thupten Nyendrak. From the great Khenpo Abu Lhagang, he received many teachings on tantra including Mipham Rinpoche’s Kagyé Namshé.

He received all the empowerments and reading transmissions for the Nyingtik cycle from the Sixth Dzogchen Rinpoche, Jikdral Changchup Dorje, and the transmission for the Seven Treasures of Longchenpa and the Nyingtik Yabshyi from Dodrupchen Rinpoche. He also received many empowerments and transmissions from Dudjom Rinpoche and Dilgo Khyentse Rinpoche. He studied poetry and grammar with Khunu Lama Tenzin Gyaltsen and the view of Jé Tsongkhapa with a geshe from Sera Jé called Thubten Kunga. His main teacher however was Kongtrul Rinpoche of Shechen, from whom he received the Nyingtik Yabshyi, Longchen Nyingtik and Dzogchen teachings, such as Yeshe Lama.

After he left Dzogchen, he traveled to Lhasa on pilgrimage with his mother, and stayed for a while at the monastic seat of Sera. While he was there he met Shechen Kongtrul Rinpoche and Dilgo Khyentse Rinpoche.

After arriving in India, he was invited by Dzongnang Rinpoche and Kochen Rinpoche to teach at Mindroling Monastery in Dehra Dun. After six years there he spent two years in Varanasi, teaching at the Central Institute of Higher Tibetan Studies, before he was invited by the Sikkimese king to Gangtok, where he served as khenpo at the government shedra. He later went to South India at the request of Penor Rinpoche and in 1978 became the first khenpo at the newly established Namdroling shedra.

He passed away on the anniversary of Longchenpa’s own parinirvana, on the 18th day of the 12th month of the Earth Sheep year (1979) at Mindroling monastery in the midst of a gathering of many thousand headed by Dilgo Khyentse Rinpoche, after delivering a long discourse on the Prajnaparamita.

Several volumes of his writings have been published in Mysore. They include his work on the Abhisamayalankara called

The Words of Jikme Chökyi Wangpo, as well as an introduction to logic and a

Prayer for the spread of the teaching tradition of Dzogchen monastery.