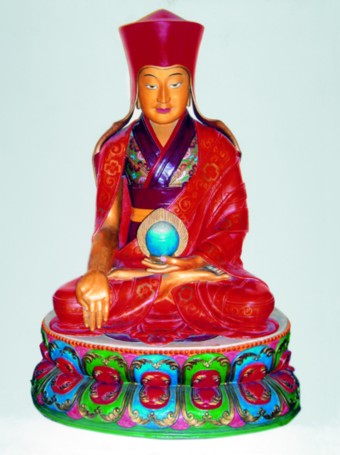 A statue of Ga Rabjampa kept at Tharlam Monastery in Nepal

Ga Rabjampa Kunga Yeshe[1], was born in 1397 in Gatö Dzonyak (སྒ་སྟོད་མཛོ་ཉག་, sga stod mdzo nyag), a region associated with the great tenth century Indian scholar, Smṛtijñānakīrti. His father, Sangye Kyap, belonged to the ancient family of chieftains who ruled the area, and his mother, Tharden Wangmo, possessed the signs and marks of a wisdom ḍākinī. Before his birth, his mother dreamt of finding a statue of the Buddha Maitreya, radiating brilliant light, in front of the Dzonyak stūpa built by Smṛtijñānakīrti.

At six, Kunga Yeshe entered the local monastery of Ga Nyidé, where he learned to read and write from a lama called Changchub Zangpo. Around this time, the lama gave extensive transmissions for the complete works of the five Sakya patriarchs, attended by many local people, including the young Kunga Yeshe. In spite of the long sessions, which left most people feeling tired and overcome by hunger and thirst, the young boy remained in perfect meditation posture throughout, causing the lama to remark, “Here is a bodhisattva whose potential has awakened. In future he will be a great holder of the teachings.” Some of those present even suggested he might be an incarnation of the great Smṛtijñānakīrti himself.

When he was eight years old, Kunga Yeshe began his study of grammar and poetics and first received teachings on Smṛtijñānakīrti’s Weapon-like Introduction to Speech (སྨྲ་སྒོ་མཚོན་ཆ་, smra sgo mtshon cha), which inspired dreams indicating he was the master’s incarnation. At the age of ten, he undertook a retreat on the deity Vajrabhairava according to the tradition of Ra Lotsawa. One night the following year, he dreamt that he was about to be attacked by a jungpo demon, and immediately assumed the form of Vajrabhairava, beating sixteen ḍamarus in his sixteen right hands and ringing sixteen bells in his sixteen left hands, while uttering wrathful mantras and fiercely stomping his feet. His mother, asleep nearby, was disturbed by the noise, and awoke to find her son standing, stomping his feet and uttering Hūṃ! In his vision, the jungpo was expelled beyond the distant ocean and from then on, it is said, no obstacles ever troubled him again.

At sixteen, he had a dream in which a lama appeared to him saying, “Son, do not remain here. Go to Ü-Tsang (Central Tibet). Follow teachers there, and study and reflect. By becoming learned, you will benefit the teachings and beings. Do not tally. Do not delay.”

During the sixth month of that same year, he received novice ordination from Thekchen Chöjé Khenpo and Drung Chöjé Kunga Rinchen. It was then that he received the name Kunga Yeshe—‘Kunga’ being the first name of both preceptors, and ‘Yeshe’ to indicate that he was the incarnation of Smṛtijñānakīrti. 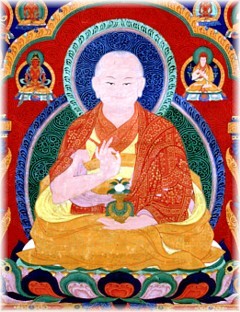 Shortly afterwards, he journeyed to Central Tibet and first made his way to the great centre of learning, Sangphu Neu’thog, where he met the great master Rongtön Shakya Gyaltsen (1367–1449), with whom he then embarked upon an extraordinarily intensive period of study, receiving teachings on almost all the most important Indian treatises. During the breaks, while Rongtön was away travelling and teaching, Kunga Yeshe took the opportunity to study with some of the most learned masters of his day. With Nyethang Paṇchen Lodrö Tenpa Zhipa, he studied grammar, and while going through Smṛtijñānakīrti’s Weapon-like Introduction to Speech, he recalled the details of his past lives, and had a vision in which he beheld Maitreya in golden form. From Martön Drepo Palden Rinchen at Chakla Drosa, he received teachings on Abhidharma and the Vinaya. He also studied the Vinaya with the master’s nephew, Martön Gyamtso Rinchen, a teacher of the first Dalai Lama, Gendün Drup (1391–1474). At Sera Monastery, which had only recently been founded in 1419, he received teachings on Nāgārjuna’s collection of reasoning and other Mādhyamika treatises from the great Gungru Gyaltsen Zangpo (1383–1450), the third throne-holder, who had studied with Jé Tsongkhapa in his youth. From Radrengpa Shakya Sönam (b.1357?), a disciple of the great Ngülchu Thogme Zangpo (1297-1371), he received a great many teachings on mind training, including the master’s own composition entitled The Flowing River of Bodhichitta.

It was around this time that Kunga Yeshe first met the great Ngorchen Künga Zangpo (1382–1457). Earlier, in Kham, he had been told by Drung Chöjé that at that time in the Sakya school there was none more learned in sūtra studies than Rongtön and none more learned in secret mantra than Ngorchen, and so he should study with them both and master both these disciplines. Thereafter, keeping this advice in his heart, he made sure to follow it. And so, in 1417 he followed Ngorchen to Sakya, and after meeting the hierarchs, went to see the great master at Shakzang Kubum. He offered a maṇḍala, requesting empowerment and instructions, and before long was granted extensive teachings on the Path with Its Fruit (lamdré), as well as many other empowerments and transmissions.

In the Iron Ox year, at the age of 25, Kunga Yeshe received full ordination in the great four-storey temple of Sakya, with Kunga Zangpo as preceptor, assisted by his younger brother, Shyönnü Senge. Shyönnü Senge became another of Kunga Yeshe’s main teachers, granting him empowerments, as well as teachings on the three sets of vows, and logic and epistemology. While at Sakya, Kunga Yeshe also received teachings from Chöjé Shyönnu Gyaltsen Chokpa, including the master’s own commentary on mind training and instructions on Parting from the Four Attachments. From the great scholar Pökhangpa Rinchen Gyaltsen (1348–1430), he received a detailed commentary on the three sets of vows, as well as reading transmissions for the writings of Sabzang Mati Paṇchen (1294–1376) and the six treatises of the Kadampas.

On his way back to Sangphu, he visited the monastery of Shyalu, and when he saw an image of the great Butön Rinchen Drup (1290–1364), he realized that this was the master who had appeared to him in his dream, telling him to come to Central Tibet.

Once safely back at Sangphu, he continued his training with Rongtön, memorizing an incredible 42 pages a day! In the spring of that year, he went on debating rounds at several monasteries, and on account of his prodigious learning which gave him victory over everyone in debate, earned the title of Rabjampa.

Finally, having accomplished all that he set out to achieve in Central Tibet, he returned to Kham. After spending more than a year with Drung Chöjé in Gatö, he renovated the practice cave at Dzonyak, and entered retreat there in the Water Hare year (1423), at the age of 27. For the next thirteen years, he put all his energy into practising the teachings he had received in Central Tibet, especially Lamdré and the practice of Hevajra, moving from cave to cave, and occasionally giving teachings and empowerments to disciples.

In the male Fire Dragon year (1436), on the 13th day of the holy month of Saga Dawa, in a ceremony marked by auspicious signs, he founded the monastery of Śrī Tharlam Ganden Sabzang Namgyal Ling. Shortly thereafter, in the newly opened monastery, he gave many transmissions, including that of the writings of the five Sakya patriarchs.

In the Iron Horse year (1450) he learned that Rongtön, who had founded his great monastery of Nalendra in 1436, had recently passed away. Swiftly, he returned to Central Tibet in order to pay his respects before his former master’s kudung at Nalendra. On the same trip, he also visited the famous Jowo statue in Lhasa and his former study college of Sangphu, where he donated offerings to all the monks. Continuing on to Tsang, he visited the newly constructed monastery of Ngor, presented offerings to his teacher, Kunga Zangpo, and received further instructions. In 1451, he visited Sakya, where he made a connection with the new hierarchs, including Dakchen Lodrö Wangchuk (b.1402), and gave offerings to the monks. During his stay, he had a clear recollection of being at Sakya in his former lives, and composed a praise of the monastery entitled Ocean of Blessings.

Once back at Tharlam, in the Water Monkey year (1452), he gave extensive teachings on the Seven Points of Mind Training, accompanied by auspicious signs that included earth tremors, rainbows, a rain of white flowers, music heard from the sky, and the smell of incense pervading the air.

In the Earth Hare year (1459), aged 63, he journeyed to Döndrup Ling monastery , where he met the Sakya hierarch, Dakchen Gyagarpa Sherab Gyaltsen (1436 or 1439–1495). Following their encounter, he was invited to teach at Döndrup Ling, and for the next few years spent his summers there and his winters at Tharlam. Much of his time during these later years of his life was spent in retreat.

Finally, in the year of the Iron Tiger (1470), at the beginning of the first month, he composed a prayer that included the lines: “As soon as the appearances of this life cease, may I be born in the heaven of Tuṣita, as the son of the protector Maitreya, and savour the glorious Mahāyāna teachings.” Many times, he told those around him that he would not remain for long. He asked his nephew Namgyal whether the index to the works of the five Sakya Patriarchs had been completed, and on learning that it had not, told him to hurry up. Some days later, when it was finished and offered to him he expressed his delight. He later entrusted to his disciples his most sacred possession—an image of the gandhola at Bodhgaya, handcrafted from nāga clay by Smṛtijñānakīrti and containing many sacred relics

Finally, as dawn broke on the morning of the thirteenth day of the second month, his heart-son Drung Tsultrim Gyaltsen and his nephew Jamyang Kunga offered him a padded cushion made of pure white cotton, requesting him to remain longer in the world. But he replied that his illness was too severe and that to stay would be of no benefit. Adopting the posture for the moment of death that is specified in the tantras, he exhaled and reabsorbed his mind into the mind of Maitreya. Thereafter, he remained in tukdam for three and a half days. 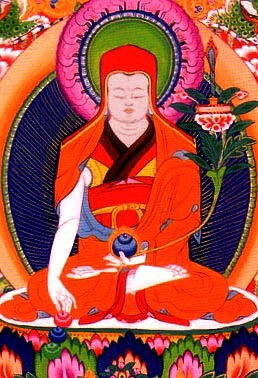 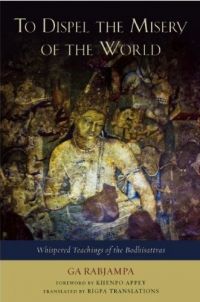 Rigpa Translations:
To Dispel the Misery of the World

Plus a large record of teachings received (གསན་ཡིག་, gsan yig) in 133 folios.