In the Sarma tradition, the Yamantaka Tantras are classified as the second category of Father Tantra, known as the Anger class. There are sometimes said to be three forms of Yamantaka: Red Yamari, Black Yamari and Vajrabhairava. 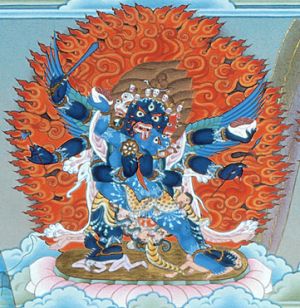 Yamantaka also appears as one of the eight deities of Kagyé (see image) , where he is also known as Manjushri Body ('jam dpal sku). The instructions related to this form of Yamantaka are based on the so-called "four chakras": secret or abiding chakra, chakra of existence, cutting chakra, and chakra of manifestation.[1]

Yamantaka is also one of the four male gate keepers.