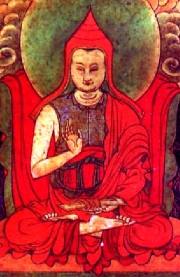 The great embodiment of the Early Translation teachings, lord of siddhas and powerful vidyadhara, Pema Vajra Tsal, was born at the end of the thirteenth calendrical cycle [i.e., before 1807] in Rudam in Eastern Tibet, in the family of Kangtsa, who were said to be descendents of the Ling Mukpo clan.

From an early age, he naturally possessed signs of accomplishment, such as the ability to perceive the illusory forms of gods and demons, bind them under oath and so on. He was recognized by many great masters as an emanation of Zurchen Chöying Rangdrol. When he grew older, he entered the assembly of Dzogchen Monastery, where on account of his natural intelligence, which was beyond compare, he amazed everyone by mastering the various practices and rituals after only the most basic training.

He studied with the Fourth Dzogchen Rinpoche Mingyur Namkhé Dorje, Jikmé Gyalwé Nyugu, Gyalsé Shenpen Thayé, Sengtruk Pema Tashi and many other learned and accomplished masters. Like a vase being filled to the brim, he received teachings on sutra, mantra and the basic sciences, empowerments and instructions from the kama and terma, and oral instructions from the hearing lineage, and became a highly learned and accomplished master in his own right. In particular, his realization became fully matured through the ultimate form of transmission, when he had a vision of the wisdom body of the omniscient Jikmé Lingpa and received the transmission of the secret heart-essence of luminosity.

For the first part of his life, he remained on the great golden throne of a senior khenpo at the shedra of Dzogchen Shri Singha, the great source of learning in the Land of Snows. In addition to more general teachings on the major scriptures of the sutra and mantra traditions, he taught especially the king of all tantras, The Web of Magical Illusion. Through his efforts, many great holders of the teachings emerged to ensure the continuation of the lineage, including Phurtsa Khenpo Akön, Orgyen Tendzin Norbu, Jamgön Mipham Namgyal and the perfectly disciplined monk Könchok Drakpa.

In the later part of his life, he established a seat at Dzogchen Pemé Thang, and remained as a great vajradhara of the ultimate teachings, turning the wheel of Dharma by teaching the tantras, commentaries and pith instructions on a vast scale. Students gathered from all directions, like a constellation of stars in the night sky, and the great masters of the Rimé tradition at that time honoured him as their crown jewel, and received from him pratimoksha, bodhisattva and mantrayana commitments, maturing and liberating empowerments and transmissions from the kama and terma, as well as the pith instructions of Nyingtik.

In the year of the Fire Snake (1857), when he received the empowerment of Düpa Do from the Khenpo Pema Vajra, who was the emanation of Ngenlam Gyalwa Chokyang, he had a stable and clear vision of the entire mandala during the main phase of the empowerment. That evening, he met So Yeshe Wangchuk and received the more immediate lineage for the all the ripening and liberating empowerments and instructions of Düpa Do. Similarly, the Fourth Shechen Gyaltsab honoured him as the uncommon lord of all buddha families, and received from him the ordination name of Gyurme Pema Namgyal. In his collected writings, the great Gyaltsab Rinpoche refers to him as “the great omniscient Khenpo Pema Vajra” and in his Calling the Lama entitled The Swift Infusion of Blessings he writes:

Embodiment of the wisdom of the buddhas and the vast assemblies of gurus, devas and dakinis,
Treasure mine of precious teachings of scripture and realization of all three vehicles,
Peerless spiritual guide and leader of limitless beings,
All-embodied refuge, Pema Vajra, care for me!

Inseparable from youthful Manjushri, who knows all the infinite objects to be known,
Avalokiteshvara, who is lord over the Land of Snows, and a unique treasure of compassionate love,
And Vajrapani, with his perfect strength of spiritual power and capacity,
Glorious protector of the teachings and beings, Pema Vajra, care for me!

Outwardly, you are shravaka mendicant, upholding the discipline of the vinaya with total purity,
Inwardly, you are a bodhisattva of the mahayana, your mind perfectly trained in bodhichitta,
Secretly, you are a yogin who practises secret mantra, and has perfected the two phases
Single eye for all the world, Pema Vajra, care for me!

King of renunciation, in whom all clinging to the eight worldly concerns is self-liberated,
Mighty one, who has cast aside the distractions of ordinary activity and is diligent in practice,
Great meditator, who has overcome delusion, realizing the inseparable nature of appearances and mind,
Holder of the most essential ‘heart’ teachings, Pema Vajra, care for me!

First, a preceptor of the pratimoksha, leading through the door of the teachings,
Then, a teacher of the mahayana, transmitting the bodhisattva vows,
And finally, a master of the secret mantra, bestowing empowerments and transmissions,
You whose kindness can never be repaid, Pema Vajra, care for me!

He composed a great many prayers and praises such as this.

In addition, Do Khyentse Yeshe Dorje, Dodrup Tenpé Nyima, Jamgön Mipham Rinpoche and many other masters received teachings from him on the glorious Guhyagarbha Tantra, and, by passing them on in turn, ensured that this excellent stream of transmission has continued, without diminishing, even down to the present day. The great Adzom Drukpa Drodul Pawo Dorje too received from him the profound and secret essential instructions of Lama Yangtik. In this way, Khenpo Pema Vajra contributed to the teachings by granting countless empowerments and instructions from the kama and terma to numerous great masters, including the Fifth Dzogchen Rinpoche, the Fifth Shechen Rabjam, Öntrul Thutob Namgyal, the great incarnate tertön Lerab Lingpa and Dudjom Rolpa Tsal. For the sake of future generations, he composed more than six volumes of writings, including commentaries on philosophical texts, explanations of the old and new tantras so on. Yet, since the printing blocks for these texts were not carved straightaway, and because of all the loss and destruction of recent times, only two volumes still remain today among the wood blocks at Shri Singha shedra.

Having worked impartially in this way for the spontaneous accomplishment of his own and others’ welfare, his work of benefitting beings in this realm ceased temporarily on the third day of the second month of the Wood Monkey year in the fifteenth calendrical cycle (1884), and he displayed the signs of merging his wisdom mind with the dharmadhatu.[1]

Commentaries on the practice of Dukngal Rangdrol: