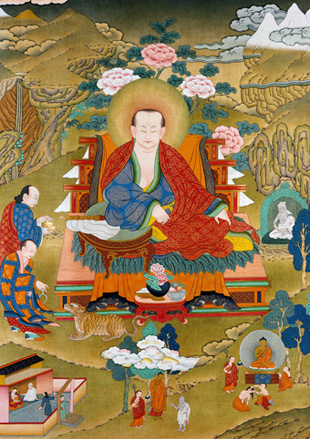 Vanavasin was a learned scholar of the Vedas who became an ascetic in the forest and attained a certain level of realization. Knowing it was the right time to convert him, the Buddha came to the grove where he lived. Upon seeing the Buddha he was immediately filled with faith. He then listened to the Dharma, studied and practiced with great devotion and attained the level of arhat. The Buddha said that amongst those who dwell in solitude, Vanavasin is the most excellent.

With a retinue of 1,400 arhats he dwells in the mountain cave of Saptaparni in Rajagriha, India. He has the power to counteract the effect of actions opposed to the Three Jewels, and praying to him protects from distraction and leads to the fulfilment of all wishes.