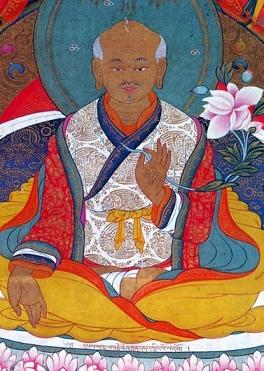 Sakya (Wyl. sa skya), which is one of the four main traditions of Tibetan Buddhism, takes its name from the Sakya Monastery, founded by Khön Könchok Gyalpo in 1073. The name Sakya literally means 'grey earth', and is a reference to the unusually pale colour of the earth at the site. Due to the widespread influence of the monastery's earliest masters, especially the so called 'Five Sakya Patriarchs', it quickly developed into one of the main schools in Tibet, developing a special reputation for scholarship. The most important teaching within the Sakya tradition is the Lamdré, or 'Path with Its Fruit', a series of meditation instructions associated with the Hevajra Tantra.

The Sakya school has its origins in the ancient Khön family of Tibet. Khön Luyi Wangpo was a disciple of Guru Rinpoche and one of the first seven Tibetan monks, the so called 'seven men to be tested'. Several generations later, in 1073, his descendant Khön Könchok Gyalpo founded the monastery of Sakya in Tsang province.

The Sakya tradition was established and spread by five great masters, the 'Sakya Gongma Nam Nga': Sachen Kunga Nyingpo (1092-1158), his two sons Sönam Tsemo (1142-1182) and Drakpa Gyaltsen (1147-1216), his grandson Sakya Pandita (1182-1251) and the latter's nephew Chögyal Pakpa (1235-1280). The Sakya lamas attracted the patronage of the Mongol emperors of China, and in 1253 Kublai Khan conferred the rulership fo the whole of Tibet upon his teacher, Chögyal Pakpa. This political ascendancy of Sakya lasted about a century, but Sakya itself remained an autonomous principality.

The leadership in the Khön Family and the throneholders of the Sakya school have since then alternated between the Drolma and Phuntsok Podrangs. The Sakya tradition follows the complete Buddhist teaching of sutras, tantras and the outer sciences, the special teaching of the Sakya school being the Lamdré ('The Path with Its Fruit'), which emphasizes the Hevajra Tantra and derives from the great Indian mahasiddha Virupa. Always stressing study as well as practice, the Sakya school has a reputation for scholarship and has produced a large number of outstanding scholars, such as: Yaktön Sangye Pal, Rongtön Sheja Kunrig, Ngorchen Kunga Zangpo, Gorampa Sönam Senge, Rendawa Shyönnu Lodrö and Shakya Chokden.

During the last century, the Sakya school enjoyed a new wave of creative activity under the inspiration of the great figures of the Rimé movement, such as Jamyang Khyentse Wangpo, Loter Wangpo and Gatön Ngawang Lekpa.

His Holiness Sakya Trizin, born in 1945, is the present head of the Sakya school, and the 41st in succession. He is renowned as an emanation of both Manjushri and Mahasiddha Virupa, the founder of the Lamdré teachings, and also as an incarnation of Apang Tertön. Born in Tibet, he escaped with his family to India in 1959 where he continues to live and rebuild both the lay and monastic elements of the Sakya tradition. He has guided the establishment of over thirty monasteries in India and Nepal and has helped found Sakya centres around the world. His elder sister is Jetsün Kushok Chimey Luding. He has two sons, Khonrig Ratna Vajra Sakya and Khondung Gyana Vajra Rinpoche.

In exile in India, H.H. Sakya Trizin has initiated various projects to preserve and promote the great living tradition of the Sakya school. The Sakya Centre in Dehradun, the main seat of the Sakya school and the personal monastery of His Holiness Sakya Trizin, also offers traditional education in Buddhism, rituals, ritual music and dance, art and other related subjects. After completing their studies at the Centre, monks can attend either Sakya College or the Sakya Institute of further education in Higher Buddhist Studies.

The Sakya College is a school of higher philosophical studies where teaching methods are based on those of the Dzongsar shedra in East Tibet established by Jamyang Khyentse Chökyi Lodrö. Dzongsar attracted many of the best scholars throughout Tibet, including Khenpo Appey, the former principal of Sakya College. The main Sakya retreat centre, which was under the direction of the late Chogye Trichen Rinpoche, is located in Nepal.

The Sakya Institute in Puruwala, India, was established in 1980 with the intention of imparting further education in Higher Buddhist Philosophy and Thought with particular emphasis on aspects of the Sakyapa Tradition. The purpose of this Institute is to train young monks to develop into the next generation of teachers.

Among the Sakya centres established in the West is that directed by Sakya Dakchen Rinpoche, the head of the Phuntsok Podrang Palace of the royal Sakya lineage, whose seat is in Seattle.

The two main subschools are: