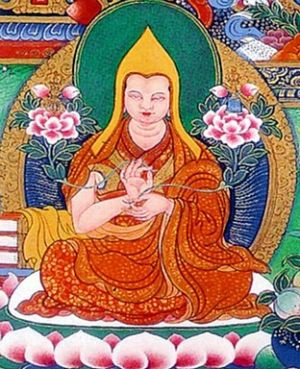 Kangyur (བཀའ་འགྱུར་, Wyl. bka' 'gyur) literally the 'translated words' of the Buddha. The Kangyur is a collection of the Buddha's own teachings in their Tibetan translation. The words of the Buddha are the sutras and the tantras. The parent collection of the Kangyur is the Tengyur that gathers the treatises composed by the great Indian masters of the first millennium in Tibetan translation. Though these collections aimed at exhaustiveness, most Nyingma tantras were left out by their Sarma compilers. This lead to the creation of the Nyingma Gyübum that brings together the Nyingma tantras.

The compilation of the first version of the Kangyur was finalized by the great scholar Butön Rinchen Drup (1290-1364). Several versions of the compilation existed in Tibet, among which the most notable are those from Dergé, Lhasa, Narthang, Choné, Peking, Urga, Phudrak, and Tok Palace. Before the compilation work started, most of the texts in these collections existed in several translations. The editors chose the one they considered the best. While the 'chosen one' became authoritative, most of the other ones disappeared. The different editions mostly show minor variations in the texts collected.

The Sūtra of the Ornament of the Buddhas