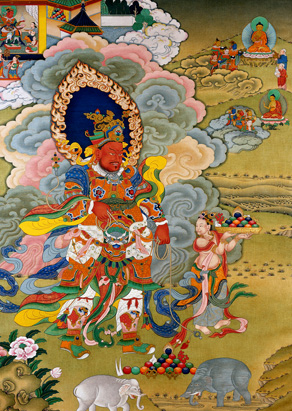 In a previous life he was a garuda and, along with Vaishravana, had attacked two nagas who lived fearlessly on the ocean surface but were unable to harm them. The nagas explained that they had taken refuge in Buddha Kashyapa and their virtue protected them. Hearing this the two garudas also took refuge. The two nagas and two garudas all prayed to be reborn in the time of Buddha Shakyamuni in order to support him.

He protects beings in the western direction, averting forces that obstruct the practice of Dharma. His glance is harmful to beings and so he avoids looking at them by gazing at the stupa he carries.