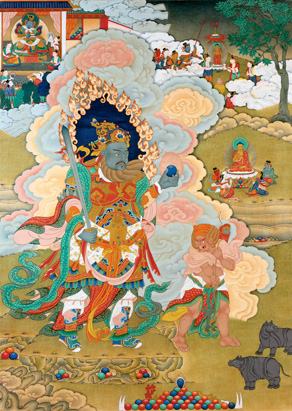 Virudhaka (Skt. Virūḍhaka; Tib. Pak Kyepo; Wyl. 'phags skyes po; Eng. 'Noble Birth') — one of the Four Great Kings. Guardian King of the South and leader of the kumbhandas, fierce beings who reside in the desire realms of the heavens.

Virudhaka, along with the other guardian kings, protected Buddha Shakyamuni's mother before the prince was born and continued to assist him during his lifetime. Today he protects beings who have led a virtuous life from Yama, the Lord of Death, and uses his power to ward off anything that would disrupt the Dharma.

Because his touch is harmful to beings he carries a sword to prevent them from approaching him.