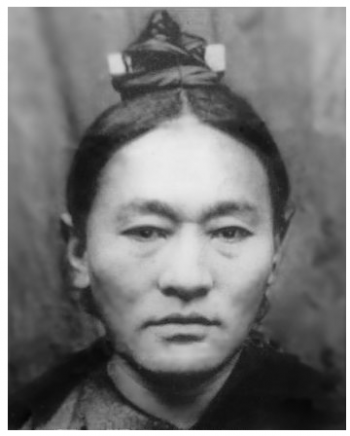 Pegyal Lingpa (Wyl. pad rgyal gling pa) (1924 -1988) was a contemporary tertön from Tibet who settled later in Bhutan. He became a student of Dudjom Rinpoche and was also very close to Chagdud Tulku Rinpoche.

Pegyal Lingpa was born 1924, the wood-rat year of the 15th Rabjung Tibetan cycle, in Golok Serta, of Eastern Tibet, among the clan of Chok tsang of Mukpo clan. His father was Pema Jigmed and his mother Sherab Tshomo[1].

Pegyal Lingpa was later recognized as an incarnation of Nupchen Sangye Yeshe [2]. Oral stories recount that from childhood Pegyal Lingpa was extraordinary and that he could perform all of the different tantric rituals even while he was playing.

Pegyal Lingpa was trained in Tibet.

Pegyal Lingpa left Tibet with the diaspora and spent time first in Pemakö, India. Later, he settled and lived mainly in Bhutan, where most of his students where.

He revealed both sater and gongter. Most of Pegyal Lingpa's gongter were revealed in Tibet, and so almost all of these texts were lost during the political events in the 1960’s.[3]

One of the terma of Pegyal Lingpa is the Kusum Gongdu. This cycle, known as the ‘Union of Enlightened Intent of the Three Kayas’, was revealed by Pegyal Lingpa in Pemakö in 1960. The inner sadhana of this cycle is the Pema Sangwai Thigle aka Red Vajrasattva practice, which is widely practiced as a drubchen within the sangha of Chagdud Tulku Rinpoche.

Among Pegyal Lingpa’s students are:

Pegyal Lingpa passed away in 1988, shortly after having revealed the Kusum Gongdu.