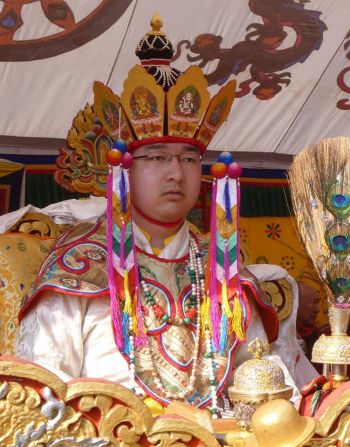 Dudjom Sangye Pema Zhepa Rinpoche has been recognized as an incarnation of Dudjom Rinpoche. Before Kyabje Dudjom Rinpoche passed away, he mentioned that: "I will go to China, and I will be reborn into my own family." His own rebirth has come to pass exactly as predicted. Dudjom Sangye Pema Zhepa Rinpoche was born in the Iron Horse Year of the 17th Rabjung Cycle (1990) in Kyegudo (Yuesue County of Qinghai Province in China) to Kyabje Dudjom Rinpoche's own son, Dola Tulku Jigme Chökyi Nyima Rinpoche, and his wife Pema Khandro.

When Yangsi Rinpoche's mother was three months pregnant, one day she saw a rainbow over their house and she knew that it was an auspicious sign. Since then, many rainbows have appeared to them, and some even appeared inside their room. After Yangsi Rinpoche was born, many great lamas of different traditions came to see him. Some said that he must be a tulku of the Sakya lineage, while others said that he might be a tulku of the Gelug.

Yangsi Rinpoche was first recognized as the tulku of Kyabje Dudjom Rinpoche by the great tertön and wisdom dakini Tare Lhamo, the daughter of the great tertön Apang Tertön in Golok. The prophecy came to her in poems of dakini scripts, which she translated into Tibetan.